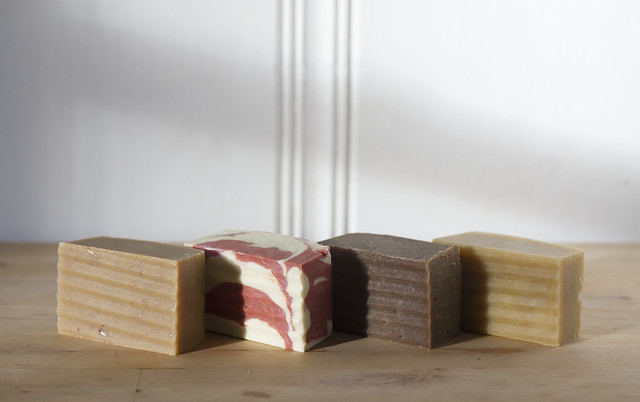 Soap making has been on the docket for years, but something’s always stopped me from getting organized enough to make a batch. There are hundreds of cold-process soap recipes on the internet, and it’s hard to know which are reliable and simple enough for a beginner. I also knew I’d need to amass a small collection of dedicated cookware, measuring cups, utensils and thermometers so I wouldn’t end up mixing pancake batter in a bowl that once had lye in it. Speaking of lye, I was nervous about working with such a potentially dangerous substance– especially considering how often I manage to spill boiling hot tea on myself (more frequently than I’d care to admit).

Nothing motivates me quite like the holiday season, so with the December deadline looming, I got to work. I used a similar base recipe for all the soaps, and subbed different liquids and additives to create each scent: goat milk, honey, & oat soap; peppermint soap; coffee soap; and beer soap. The peppermint batch was the only one I tried coloring. I’d hoped to achieve a vibrant red and white swirl, but the bright red I mixed up faded to a kind of dull brick-red, and when striped with an off-white, resulted in what Nick referred to as “bacon colors”. So, I still need a little practice coloring soap. Because I wasn’t sure my soap experiment wouldn’t be a terrific disaster, I didn’t invest in a soap mold– instead, I spent a shockingly short amount of time saving empty quart-sized cream cartons and used two for each 5 lb batch of soap. After a day or two, the soap hardened and I peeled the cardboard off. These worked pretty well in the short term, but bowed a little when they were filled, which meant my finished bars were a little wonky.

Each batch yielded 16 bars with a little trimmed off the top for testing. I used a crinkle cutter to give each bar a fancy rippled top. After the bars cured for a month, they were wrapped in paper sleeves, labeled, and handed out to family and friends. 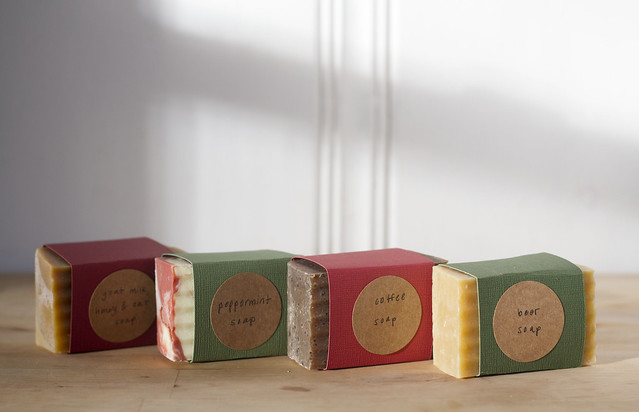 Posted on January 23, 2015 by Jessica This entry was posted in Experiments, Soap. Bookmark the permalink.

One Response to homemade soap