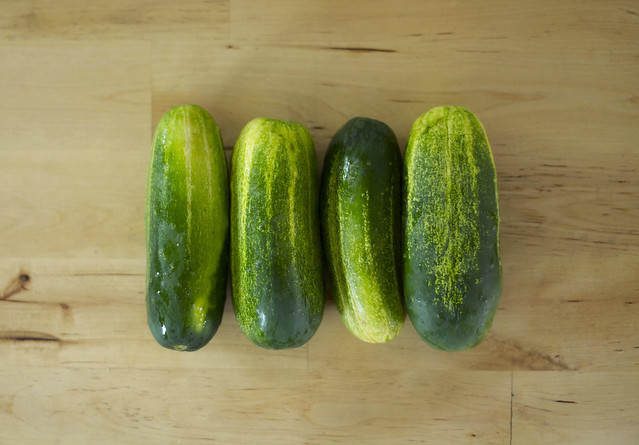 It’s rare (ahem, virtually unheard of) that I set out to do something and actually achieve the ideal I am striving for. I am unendingly exacting and I don’t throw out the word “perfect” lightly, but in this case, I think it’s warranted.

For years, my go-to pickle recipe involved a boiling vinegar brine. This makes a decent enough pickle, but they’re pretty acidic, and the heat from the brine cooks the cucumbers a bit, resulting in a tragic loss of crunch. I wanted something less sour, more briny and crisp, and after exhaustive research and recipe tinkering, I got it. The resulting recipe is kind of a hybrid of the vinegar pickles I was making and the half-sour pickles you’d find in a typical deli. The brine is cooled to room temperature before it’s introduced to the cucumbers, which means they stay nice and crunchy. There’s still a bite of vinegar, but not too much.

This recipe is for one quart jar’s worth, but it’s easy to scale up or down. You could use fresh dill in place of dill seed, but I find it gets weird and limp after sitting in brine, so I stick with seeds. Feel free to up the garlic for extra garlicky pickles, or toss in some hot peppers or additional crushed red pepper for a spicier version. Because these pickles aren’t made with the cleansing aid of a boiling acid and because they ferment at room temperature, there’s a bigger risk of funky bacteria growth. It’s crucial to sterilize all your jars and lids and to wash your cucumbers well. 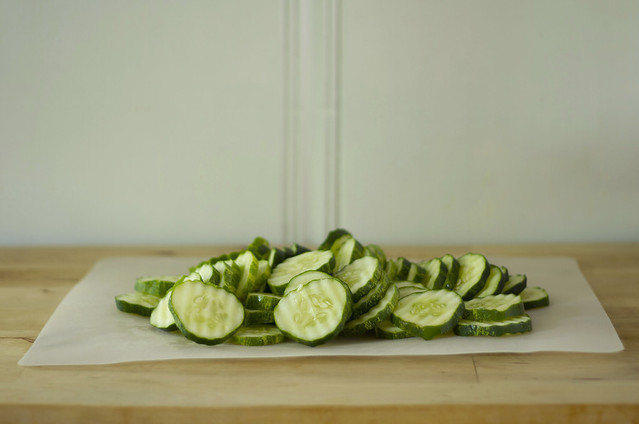 Combine the water, vinegar, and canning salt in a medium saucepan over medium heat, and stir until the salt is dissolved and the brine comes to a low boil. Allow it to cool completely to room temperature. In the meantime, sterilize any jars and lids you’re using and wash and dry the pickling cucumbers thoroughly.

Whatever shape you prefer your pickles to be, make sure you remove the blossom end of your cucumbers (it releases an enzyme that keeps the pickles from staying crunchy). Cut into spears or coins, or leave whole. Add remaining ingredients to the jar and pack the cucumbers in as tight as possible so they won’t float when the brine is added– any cucumbers that are exposed to air won’t be as crunchy. Pour in the brine, leaving at least a half inch of air at the top of the jar. Let it sit at room temperature for 1-3 days or until the cucumbers are pickled to your liking (I usually try one every 24 hours or so). Once they taste right, move them to the refrigerator. 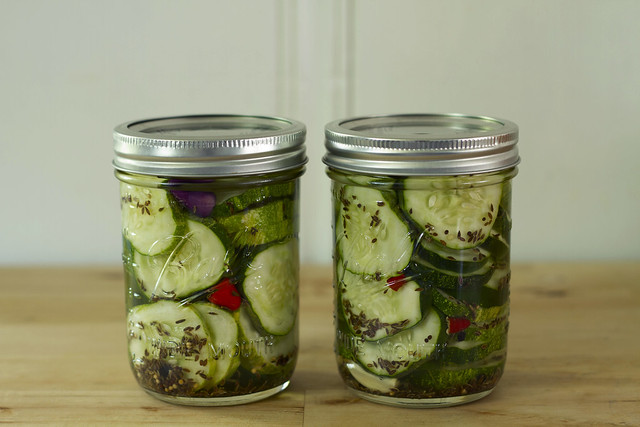 I split this batch between two pint jars and added some aurora and thai chilies. They’re amazing atop a burger, but at my house they are mostly eaten straight from the jar with a fork. They’ll keep for a few months in the fridge (if they last that long).

Posted on July 31, 2017 by Jessica This entry was posted in Food. Bookmark the permalink.