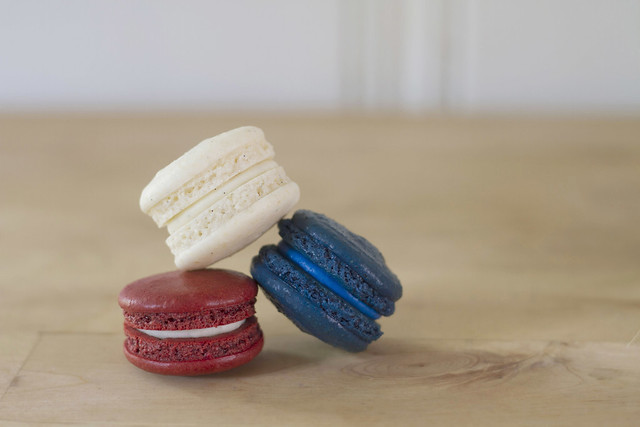 I made these macarons for a friend’s baby shower a few days ago, and it just so happened that the nautical-themed colors coincided perfectly with the July fourth holiday. Vanilla bean and red velvet are two flavors I’ve baked before, but the blueberry was a new one. I added a heaping tablespoon of blueberry powder (made by whirring some of these in a spice grinder) and each sandwich got a kiss of blueberry jam and a dollop of blue-tinted mascarpone frosting. Next time I’ll double the blueberry powder and up the jam so each bite is packed with a more intense blueberry flavor. Precisely ten minutes after I finished piping the last macaron, it dawned on me that parchment paper might be sold in sheets rather than in a roll, and it is! I don’t know how it took me so long to figure this out, but my macaron game is about to get a lot better now that I no longer have to fight the creeping edges of curly parchment. I wish I’d had this epiphany sooner!

Because these macarons served as party favors, I finally got some use out of this impulse buy from last year: macaron boxes! 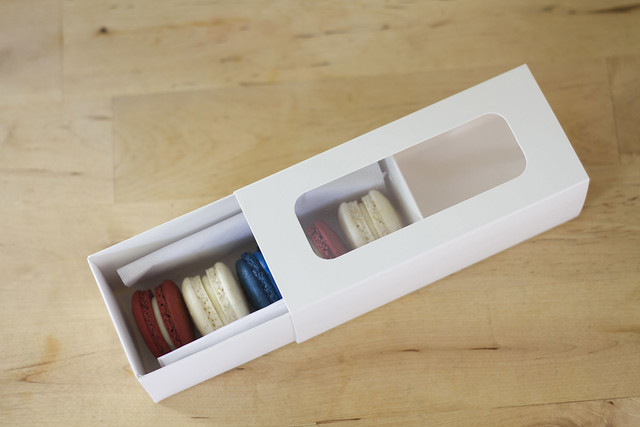 I’m always grateful to be an American, but this Independence Day is made much more poignant and meaningful after the recent and long-overdue supreme court ruling. I’m so proud to live in a country that champions equality. Happy birthday, America!

Posted on July 4, 2015 by Jessica This entry was posted in Food. Bookmark the permalink.